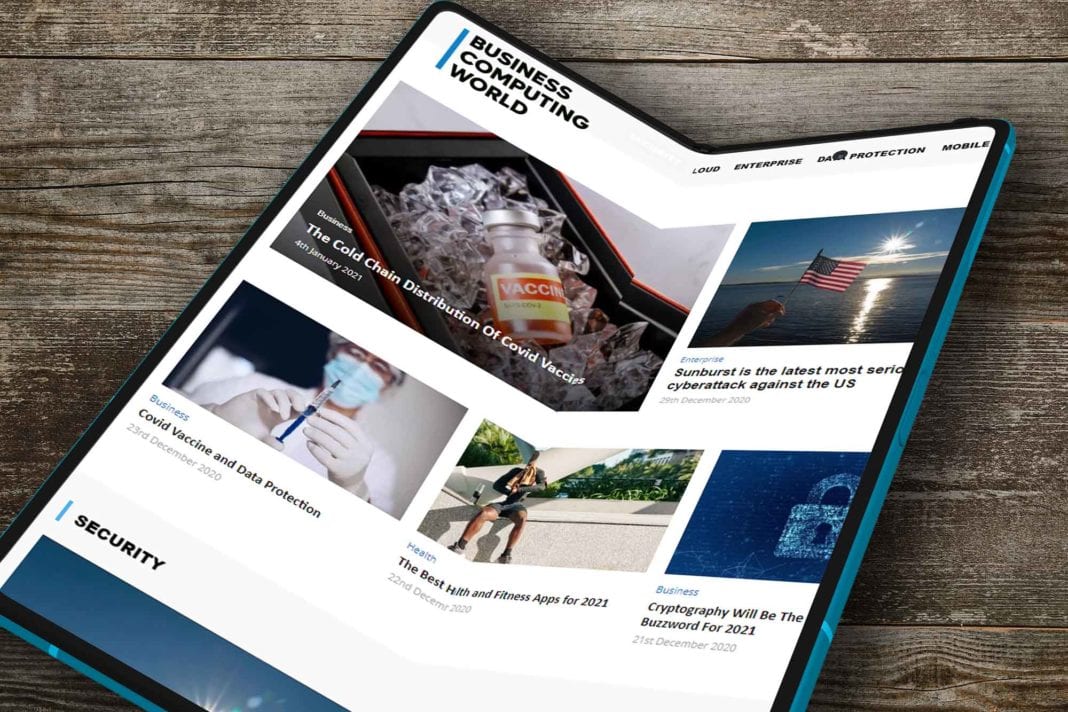 The end of 2020 saw the major players in consumer technology prepare to unveil their plans for the next year, and, amongst exciting developments in gaming and wearable tech, the trend for foldable devices is garnering its fair share of attention.

What You Need To Know About Foldable Tech

You can perhaps remember the popularity of the flip-lidded mobile phones of the mid 2000s. Handsets such as the Motorola Razr were flagship sellers at the time, but their reign ended with the rise of 4G technology and the smartphone. Now, tech manufacturers are looking to recreate this folding experience only this time, the devices will fold without clunky exterior hinging. Foldable technology so far has been applied to smartphones, with the earliest incarnations already on sale, but there are plans from brands such as Lenovo to produce other foldable devices such as tablets, too.

Foldable technology so far offers a choice of two approaches. There is the single flat touch screen which can be closed to display a smaller screen which can show notifications, selfie previews and other simple information. Examples of this type of foldable device include the Samsung Z Flip, or the new Motorola Razr which is now produced by Lenovo.

The second type of foldable device is formed by two touch screens, which when folded out flat offer a tablet-like experience, or when folded in half provides a smaller touchscreen. Examples of this type of foldable currently include the Huawei Mate X and the Galaxy Fold by Samsung.

Even Apple is convinced that foldable devices will gain traction with consumers, and is developing its own super-flexible smartphone. Whilst it is early days for this product, Apple is aiming to create a device which can be folded an incredible 100,000 times. The current goal for launch is 2022, giving Apple plenty of time to learn from the mistakes of other foldable tech manufacturers.

Why The Drive For Foldable?

It has been surmised that manufacturers are keen to reinvent the smartphone, in order to keep consumers interested in paying for the latest upgrades. After all, modern smartphones are durable, practical and boast an ever-broadening array of capabilities from professional standard photography to acting as a functional mobile office. If we hang onto these devices for a number of years, the manufacturers see their profits drop, so keeping innovation fresh helps to stimulate consumer demand.

It remains to be seen, however, if the newest foldable devices can capture the public’s imagination. Previous smartphone designs have built on customer feedback, tailoring the next models to the specifications that customers wanted to see. This trend for flexible technology seems, instead, to have been brought in from left field. The earliest examples, such as the Samsung Galaxy Fold received a lukewarm reception when they reached the market last year, which was further compounded by significant durability issues.

The benefits of choosing a foldable smartphone are at present lagging behind their reported problems, such as breaking hinges and a softer, less durable screen. Many consumers would feel that this is too high a price for the benefit of a larger screen which can be folded down for ease of portability. The next generation of foldable tech must overcome these teething problems if it is to become a design staple.

The industry certainly appears to be committed to this technology, with Samsung announcing more foldable devices for this year. It may be that other products such as laptops and notebooks are ultimately destined to be more practical recipients of foldable styling. However, whichever direction that manufacturers ultimately choose to take, it seems certain that foldable mobile tech will be a growing trend for 2021 and beyond.

Mobile Tech In 2021- Is The Future Foldable?